Well hello! A version of this article also appeared in theIt’s Not Just You newsletter.Sign up here to receive a new edition every Sunday for free.

Two weeks ago, I wrote about actor and director Justine Bateman’s new book,FACE: One Square Foot of Skin, in which she asks why women still spend so much time in a frustrating quest to ‘fix’ their faces in response to a culture steeped in anti-aging messaging.

The response was overwhelming. Hundreds of thousands of you read the piece on TIME.com, and many commented on Twitter or wrote to me. Most praised Bateman for dragging these secret fears into the sunlight, writing: “It’s so great to see Justine advocate for women to be themselves.” And: “The system needs fixing, not women.”

Others asked: “How in the hell do we get men to stop caring?” Some feared losing their livelihoods if they didn’t try and look younger. Many men wrote to say they thought Bateman’s unaltered face was beautiful as is; others were less than supportive. Ahem.

The book provoked discussions across the internet, so I thought it’d be great to talk to Justine about the reaction and her battle cry of #TheresNothingWrongWithYourFace. Excerpts of our conversation are below. 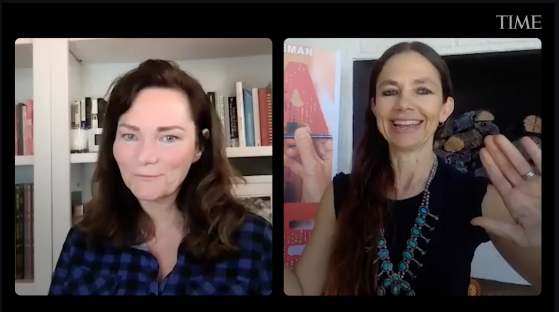 On the reaction to FACE: One Square Foot of Skin

“I was not prepared at all for the magnitude of the response. I’ve had hundreds and hundreds of DMs on Instagram, saying, ‘I’m so glad someone’s talking about this.’ One woman said, ‘I work as a hospice nurse, helping people to die. And yet I’ve got my co-workers telling me I should do something about my face.’… and ‘it’s made me realize that I need to not be as critical about my face because I have two teenage daughters, and I don’t want them to be sort of tainted with that, that those kinds of thoughts for their own face.’”

“They are only going to sell us things that they think we need. One very easy way to generate a need for a product is to find what fears already exist and then zero in on those fears.

I’m interested in eliminating the buttons that have existed in me or may still exist in me that react to those [fears]. ‘If people think my face is old, then, therefore…’ I think for every woman, there’s a fill in the blank for that. For some, it might be they’re afraid they won’t find a mate for someone else; it might be they’re afraid they won’t, their new business won’t succeed.

What I’m proposing is to forget the face. It’s got nothing to do with your face. If you fear you’re never gonna find a mate. That’s a fear that’s going to stay with you for the rest of your life, regardless of what you do to your face. So why address that fear to get rid of it. So that then you can be free of that fear.”

On letting go of her younger face

“I always wanted to look eventually, like Georgia O’Keefe. So, all these things that start happening, you know, like, with the loose neck and the hooded eyes and stuff, and I’m like, I’m on my way! I’m gonna make it! … Now you look at my face, and you know what you’re getting… I didn’t dislike my face, but I don’t feel like it represented me the way this face represents me, you know what I mean?”

On people saying she looks ‘old’

This is the best: #TheresNothingWrongWithYourFace

If people look at your eyes/your face and the story that’s told is: fake, plastic, then… you know?

“If somebody is running a firm, and the woman looks older, and they don’t like that, it’s an interesting thing to dig into. What do we think is going on in that man, or that woman’s head, that they don’t like that they have an employee that looks older? I mean, we can guess. It might be the rule thing, like, well, she’s not doing anything about her face. And that’s the rule you should, and she’s breaking it.

“I’m just saying, maybe it’s not your face. Maybe it’s the direction you’re looking. Maybe there’s a new direction open for you, and you’re not paying as much attention to it. And the timing’s right for you to go in that direction. Because I feel like everyone’s got a basket of opportunities, and skills and talents that come with you, when you’re born. And I feel like that basket does not care what gender I am, what, what the state of my face, my age, it doesn’t care.

You can’t steer a parked car, right? But if you start moving it, you’ll start seeing that there are certain opportunities that you hadn’t expected before, maybe in directions that hadn’t occurred to you. To me, I think life is fun. You have uncomfortable things and comfortable things, but they’re all conspiring to make you more and more yourself, one more who you are.”

Subscribe here to receive an essay from @susannaschrobs every Sunday.

Road Trip Update! Thanks to all of you for the good wishes and kind invitations for my cross-country voyage. I’m flipping the script a little bit. Dog and I will now be traveling West to East at the end of May, and I’ll be posting from the road on Instagram @SusannaSchrobs

There’s a Name for the Blah You’re Feeling: It’s Called Languishing Organizational psychologist Adam Gran on the neglected middle child of mental health can dull your motivation and focus — and it may be the dominant emotion of 2021.

Did someone forward you this newsletter? SUBSCRIBE to It’s Not Just You here.

Why the U.S. Is Underestimating Covid Reinfection

Chemotherapy drug may be effective against COVID-19, researchers say