Today marks two weeks of declining COVID-19 hospitalizations in the U.S., 14 straight days without a blip upward, according to data from the COVID Tracking Project at The Atlantic. Case numbers, too, are declining, and today the seven-day case average is down a third since its peak, on January 12.

That day, the count of current hospitalizations was 131,326; it’s now down to 108,957. It’s the first significant decline since September 21, when the climb down from the summer surge stopped just under 29,000. As the country passes the milestone of 25 million cases, it’s a stable indicator pointing in the right direction.

During the winter surge, hospitalization numbers bumped over a number of small, false summits, in which hospitalizations declined for a day or two before continuing their rise. They also rose for a couple of days after coming down from January 6’s absolute peak of 132,474.

But two weeks of decline indicate that fewer people are getting sick. An average hospital stay as of November for patients with COVID-19 was 4.6 days, down from 10.5 days in March, so if hospital numbers are down it means that people are leaving the hospital without new patients replacing them. And the typical course from symptom onset to death is roughly two weeks. Accounting for the lag in deaths reporting, this substantial decline should start showing up in the daily deaths figure, which has plateaued in recent days and is a mixed picture nationwide.

Read: The pandemic is finally softening. Will that last?

Falling hospitalizations are also occurring across the U.S. By the COVID Tracking Project’s conservative definitions, they’re falling week over week in 36 states and D.C., staying the same in 12, and rising in just three. In two of those states, Vermont and Hawaii, the rise is in double digits, 15 patients in the former and 27 in the latter. The increase in Kansas is greater in raw numbers—an additional 109 patients in the past week—but its hospitalization rate of 243 per million is in the middle of the pack. 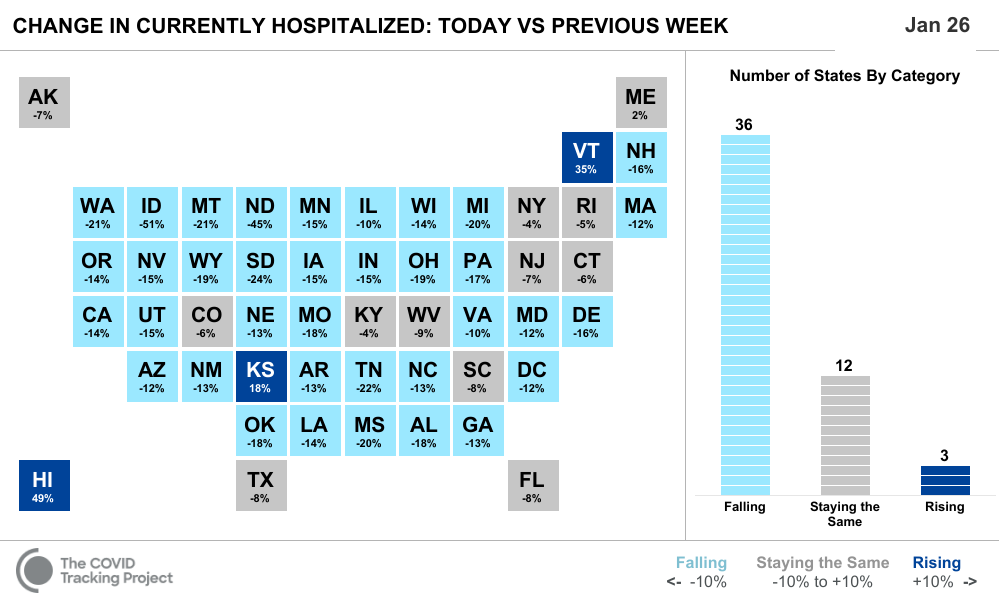 Among the encouraging news is that California is one of the states in the “falling” category. On January 7, the state peaked at 22,851 hospitalizations. Today it’s at 18,309, a 20 percent decrease in a little less than three weeks—although intensive-care units in Southern California and the San Fernando Valley remain full. California is large enough that changes there translate into changes in national numbers: That decline of 4,542 patients represents 19 percent of the nationwide decline in that period.

Hospitalizations across the Northeast, though declining, have dropped just 11 percent in the past two weeks, the smallest decrease in any region. This indicates a point of concern: New York. It’s one of eight states with a hospitalization rate over 400 per million, and unlike the others, its recent hospitalization trajectory doesn’t yet suggest a peak. 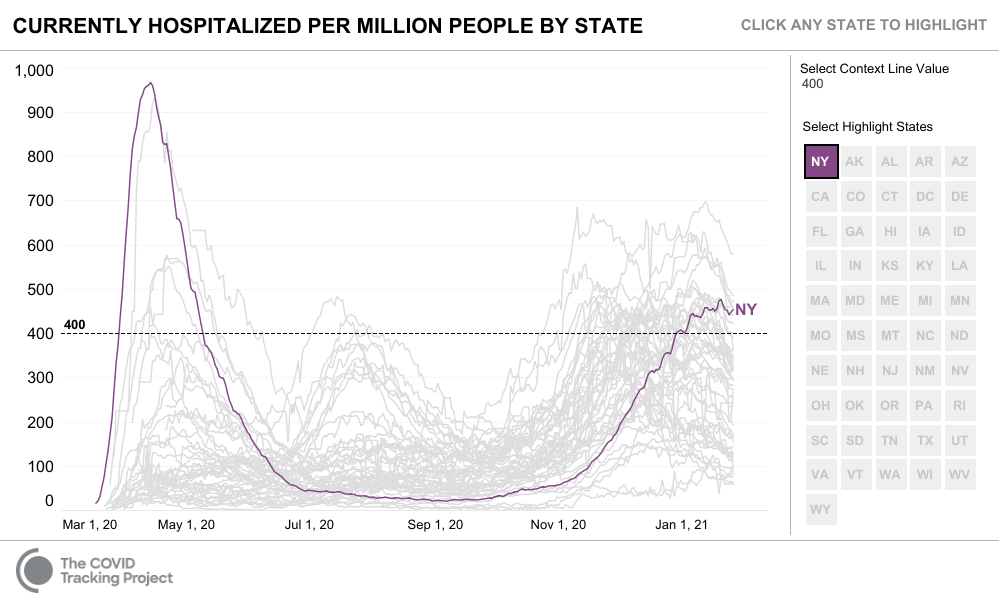 Two weeks ago, 8,926 people were hospitalized in New York. Today it’s 8,831. And the trends where the worst of the pandemic began, New York City, represent the bulk of the problem. Hospitalizations in the city are currently 3,730, up from 3,318 two weeks ago. There are 1,593 people hospitalized on Long Island, compared with 1,629 on the 12th. In the Mid-Hudson region, north of the city, hospitalizations are at 1,071, compared with 1,044 on the 12th. All these totals are far lower than the region’s spring surge, but they’re considerably higher than the summer and fall numbers, and stagnant hospitalization numbers in the region mean a lot of serious cases.

The overall trend is encouraging, but there are significant unknowns. Restrictions are being lifted in many places across the country: California and New YorkChicago and elsewhere in Cook CountyBoston. The more infectious and potentially more deadly B.1.1.7 variant has been found in 24 states, though in small numbers. Almost 20 million people have received at least one vaccine dose, as the Biden administration plans to push the number of daily doses given from 1 million to 1.5 million. How all of these factors will interact is impossible to predict, an uncertainty that provides reason for ongoing caution. But for now, the momentum is headed in the right direction: fewer hospitalizations, more vaccines.

Cancer deaths in U.S. down by nearly one-third in last 20 years, analysis finds

This Is Only Going to Get Worse